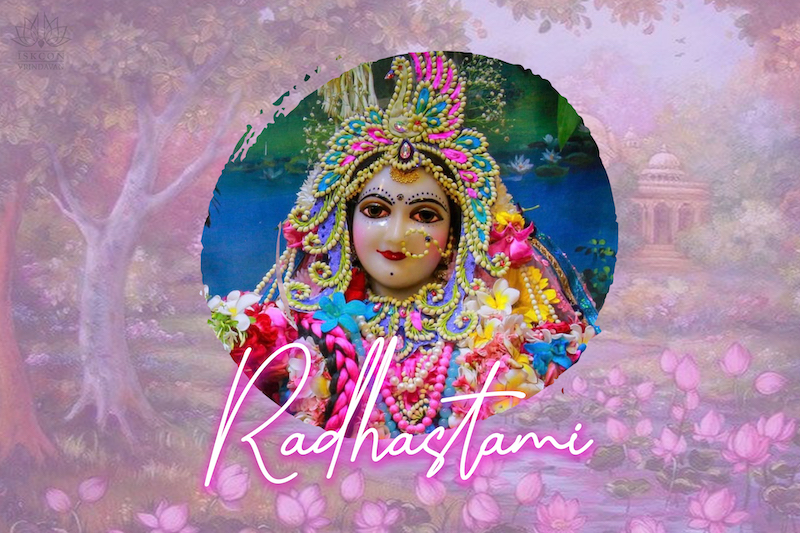 The transcendental goddess Srimati Radharani is the direct counterpart of Lord Sri Krsna. She is the central figure for all the goddesses of fortune. She possesses all the attractiveness to attract the all-attractive Personality of Godhead. She is the primeval internal potency of the Lord. (Caitanya-caritamrta, Adi-lila, 4.83)

What pious deeds must the Shukla ashtami tithi in the month of Bhadrapada have performed to be blessed with the good fortune of being the appearance day of Srimati Radhika, the original goddess of fortune and the direct counterpart of Sri Krishna. In order to accompany Sri Krishna in his pastimes in this material world, which he performs to attract the conditioned living entities so that they may be able to give up their attachment to this temporary world and relish eternal transcendental bliss in the spiritual realm in the service of Radha Shyamsundatr, she descended on this earthly planet in Raval on this most auspicious day.

One day when Sri Vrishabhanu Maharaj, the king of Raval, went to the Yamuna river to take his daily morning bath, he was struck with wonder when he saw a glorious golden lotus flower which was endowed with an unearthly beauty and was radiating a divine effulgence. Being mesmerized by the transcendental thousand petaled lotus flower, he approached it and looking inside it, he saw a most amazing, gorgeous, delicate, divine baby girl, lying on the whorl of the flower. Since he had been praying for a daughter from his worshipable Lord, the Sun god, he immediately took the baby girl in his lap and accepted her as the blessing of the Sun God. Taking her home, he joyously told his wife, Devi Kirtida, about the incident, and they both bathed the child with tears of love which were incessantly floeing from their eyes. Oblivious to the fact that they had received the original Laxmi and the consort of the Supreme Personality of Godhead, Sri Krishna, as their daughter, they simply thought of her as their very dear child and showered all their maternal affection upon her. Despite their unbounded happiness, they were greatly saddened by the fact that their daughter was not opening her eyes, because of which they did not celebrate her birth with the residents of Raval. However, anticipating the appearance of Srimati Radhika, Narad Muni soon came to the house of Vrishabhanu Maharaj and after the initial pleasantries inquired from him about his children. Maharaj Vrishabhanu then called Sridam forwards and submitted him to the lotus feet of the sage. However, Narad Muni was eager to know about their daughter, but due to her being blind, they did not inform him about her. Upon being insisted and asked repeatedly, he finally told about Srimati Radhika, and hearing about her Narad Muni immediately felt great ecstacy in his heart. He then asked to see the child, and instructing them to make arrangements for a ceremony that he would perform for her, he worshiped her with the choicest of prayers when they had gone to make the arrangements. In order to fulfil the desire of the great devotee, Srimati Radhika appeared before him in her Kishori form and blessed Narad Muni. He then instructed them to arrange for a big festival to celebrate her birth, in which they should invite Nanda Maharaj and Krishna. Following his instructions, Maharaj Vrishabhanu arranged for an elaborate festival, and during this festival, when Sri Krishna crawled to the cot of Radha, and peered inside, realising that her dearmost beloved was present before her, she opened her lotus like eyes and took darshan of Shyamsundar. Seeing the miraculous event, all the Vrajavasis were over joyed and celebrated the occasion in great ecstacy. In this way Srimati Radhika appeared in this world to perfrom pastimes with Shyamsundar to attract all the living entities.

In Iskcon Vrindavan, as soon as chaturmaas begins, all the devotees eagerly wait for Sri Radhashtami, for this is indeed the real biggest festival of the year, for Srimati Radhika is the most worshipable queen of the hearts of all the vaishnavas. Janmashtami and other festivals are but the preparation for the real festival which is the holy appearance day of our Praneshwari, the goddess of our lives. On the said glorious day, all the devotees come to take darshan of her lotus feet, which one can see only on the occasion of her appearance day and on Gopashtami in Karitk. Taking darshan of her two lotus feet, which are more cooling than sandal wood paste and are the reservoir of all mercy, the devotees feel great satisfaction. After taking darshan of the Lords in Mangal araati, they again gather to take darshan of Sri Radha Shyamsundar during darshan arati, when they don a gorgeous new outfit, splendid ornaments and are covered in fabulous fragrant flowers. Sending forth an ocean of mercy with her doe like eyes, she smiles sweetly upon seeing all the assembled devotees gathered there to celebrate her appearance day. Thereafter, the devotees listen to discourses glorifying the limitless qualities of Gandharva Sri Radha, which is followed by the most blissful Abhishek ceremony, bathing their Lordships with milk, yoghurt, ghee, honey, sugar water and various fruit juices. After having been bathed in the accompaniment of tumultuous Kirtan, the lords are offered a sumptuous bhoga offering comproising of innumerable palatable dishes prepared by devotees with great love and devotion, each and every one of which is perfectly spiced and tastes delicious. Thereafter, the noon arati is performed, after which all the devotees relish a feast. The festivities however, do not stop with this, the evening brings more celebrations with the deities being offered another new outfit at 4:30 and cultural programs being performed depicting the pastimes of Srimati Radhika. The cherry on the cake is the night 10â€™o clock darshan, when all the devotees gather for kirtan and a very special darshan of the Lords. In this way the festival of Radhashtami is celebrated with great enthusiasm by all the viashnavas.

On this most auspicious day, we pray at the lotus feet of Srimati Radhika to please bestow upon us her causeless mercy, and grant us service at her lotus feet, counting us amongst one of her own maid servants.