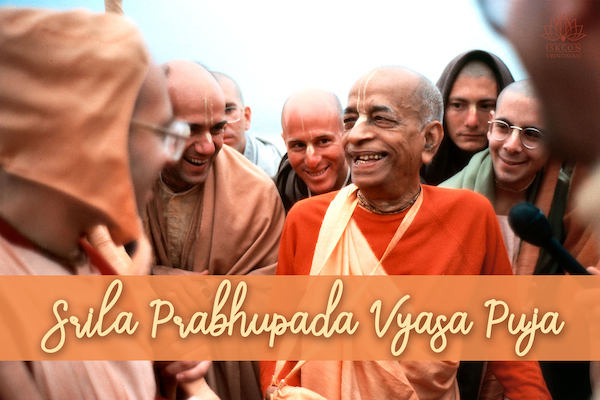 I am fully indebted to Sri Gurudeva because has given me so many things: the highest conception of the holy name of Krsna, the highest form of sound, which contains the highest form of thought, aspiration, ideal, everything. And he has given me the service of our great savior, Sri Caitanya Mahaprabhu, and His dearmost assistant, Svarupa Damodara. He has brought me in connection with Sri Rupa, who was ordered to distribute the heartâ€™s innermost dealings, the highest devotional love, raganuga-bhakti. Gurudeva has given me Srila Sanatana Goswami, who gives us sambandha-jnana, a proper acquaintance with the environment, and he has given me Mathura Mandala, which will help me in my remembrance of Radha and Govinda wherever I shall cast my glance. By his grace gurudeva has revealed the super excellent position of Radha-kunda, the favorite place of Radha and Govinda for Their pastimes and this great Govardhana. Lastly, he has given me the hope that one day I can get the service of Sri Sri Radhika and Madhava. I have been given all these assurances by my gurudeva, so I bow my head with all my respects to his lotus feet.

All glories to Srila Prabhupad, the fountainhead of all those who went to the western world to preach the glories of the holy names of the Lord, the one who delivered countless fallen conditioned souls by imparting upon them the transcendental science of Krishna consciousness, and the one who fulfilled the following prophecy of Shri Chaitanya Mahaprabhu,

â€œIn every town and village, the chanting of My name will be heard.â€

The glories of Shrila Prabhupad are unfathomable for all the devotees, who have been rescued, by Shrila Prabhupad, from the ocean of nescience and have been given an opportunity to make their human forms of lives successful by taking to the process of Krishna consciousness. It is by his causeless mercy that today numerous devotees are practicing Krishna bhakti all over the world in temples opened by Shrila Prabhupad and his followers. Indeed generations upon generations shall remain forever indebted to Shrila Prabhupa for having bestowed upon them the glorious possibility of going back home, back to godhead, by reading his transcendental books and following his instructions.

The spiritual master is receiving benediction from the ocean of mercy. Just as a cloud pours water on a forest fire to extinguish it, so the spiritual master delivers the materially afflicted world by extinguishing the blazing fire of material existence. I offer my respectful obeisances unto the lotus feet of such a spiritual master, who is an ocean of auspicious qualities.

On this auspicious day of Nandotsav, in the year 1896, the same year when Shrila Bhaktivinod thakur sent out the first book â€˜Chaitanya Mahaprabhu, His life and Preceptsâ€™ to the western world about the glories of Shri Chaitanya Mahaprabhu; the great personality who was going to inundate the entire universe with the chanting of the holy names of Lord Sachinanadan Gaurahari, and who would, in the future, fulfill the desire of all the devotees to go and give Krishna consciousness to the people in the west, Shrila A.C. Bhaktivedanta Swami Prabhupad appeared in this world for the deliverance of all the conditioned souls like us. He is none other than the personification of Shri Krishnaâ€™s mercy, who has come to deliver us from the miseries of this world and take us to the spiritual realm, where we can directly serve the Supreme Personality of Godhead Shyamsundar and his eternal consort Shrimati Radharani. This day is indeed of utmost importance for all the devotees of Iskcon throughout the world, for it was on this day that their good fortune arose in the form of the birth of their future deliverer, Shrila Prabhupad, for it is only because of him that today we all are aware of the ultimate goal of life and are working towards achieving it and it is only with his mercy that we shall all one day make it to the spiritual world. It is him only, who has given us the holy names of Shri Krishna, the service of Shriman Mahaprabhu, brought us closer to the associates of Mahaprabhu and has given us the opportunity to go to the holy places, where the lord performed his pastimes. He has given us everything that we need to progress in our spiritual lives and with his mercy we are able to engage in the service of the lord.

On this great occasion we pray to Shrila Prabhupad to please grant us service to his lotus feet, so that by serving him we may be able to make rapid progress in our endeavors in Spiritual life. The devotees of the Lord are very dear to him, and Shrila Prabhupad, who spread the names, fame, qualities and pastimes of Shyamsundar throughout the world, is especially dear to him, and grabbing hold of his lotus feet is the best way for us to reach the Spiritual world. Therefore we pray to him with folded hands:

I desire the dust of your holy feet in every birth I may take.